The History of Abbey Road Apartments

Built in 1890 by the Furness Railway Co, the main period house is now 3 of the finest exclusive Abbey apartments and was originally occupied by Arthur Brookes & family. Arthur Brookes himself was one of the first “Carter and Carriers” in Barrow-in-Furness.

This job today is similar to that of a modern day storage and removals company. Hence the description to “cart and carry” belongings for people coming to and leaving the area during the heady days of the Iron Ore Industrial Revolution and the development of the shipyard in the town.

Arthur also ran the Post Office from this building with at least 2 deliveries per day going out to the local community. The Post Office developed further into a Post Office that had upto 10 deliveries going out each per day such was the volume of post during the days of massive employment and expansion within the town. Mainly due to the super fast development of the steel and ship building industries.

By 1921 the Main house had been purchased and set up as the “Engineers Working Men’s Club”. A desirable drinking hole and leisure venue frequented by the vast number of men now working in the shipyard circa 35,000 and the 26,000 in the steelworks.

The club offered a sanctuary of entertainment, providing good local ale, snooker, billiards, dominoes and darts for the hard working men of the time

By now the working men’s club had developed a large regular following of 2000 members plus.

The club now needed a full time steward including committee to manage the ever growing needs of the working classes and indeed records have been found and kept, going back to the appointment of the Steward in 1921.

He was paid the princely sum of 5 shillings including all he could drink, free beer for his services and was provided with a 2 storey flat above the club itself as permanent accommodation.

During WWII Barrow was bombed by the Germans and the Gospel Hall next door was damaged beyond use. The Main house now apartments 1 to 3 saw its roof lifted by the shockwaves from the bombing and although the Engineers club survived to continue selling beer the signs of the Blitz surrounded the area.

A new era for the Engineers Club

By the 1970’s An ever growing number of members heralded a new era for the Engineers Club and a further expansion saw the club purchase the partially derelict Gospel Hall for redevelopment.

Unfortunately for the Gospel Hall plans were submitted for its demolition and in 1974 construction work on the new 200 seat conference room, stage and bar began and was completed in 1975.

The Popularity of the new Club was instant

Opening to a jubilant crowd of thousands the popularity of the new Club was instant, with never an empty seat in the hall throughout the whole of the 1970’s, 80’s and early 90’s. The club members were waited on hand and foot by uniformed drinks waiter’s and glass collectors.

This new level of service gave rise to the Club’s old fable that “you only ever left your seat in the Engineer’s, when you needed the toilet”

The decline of the working mans’ club

By the 1990’s the decline of the working mans’ club had become a nationwide epidemic. The local shipyard owned and run as Vicker’s Shipbuilding and Engineering Ltd shed 10,000 jobs with the steelworks having previously closed in the 1980’s with the loss of all jobs.

Inevitably the Club began its slow decline until finally in February 2014 the administrators pulled the plug on the once mighty Institute and cultural gathering place.

My name is David Clark and I purchased the now empty buildings of the Engineers Working Men’s Club and Institute whilst working on building a new modern City in Riyadh, Saudi Arabia for 100,000 people.

With the old clubs buildings being in a semi run down state and coming at the end of the “Credit Crunch” recession this provided me with an opportunity to purchase and redevelop the buildings into new modernist apartments which we see today.

With a changing UK culture and more professional travelling workers once again seeking work in the BAE Shipyard building submarines and the offshore windfarm programmes, Barrow’s fortunes were about again beginning to change.

In 2015 plans were passed for the now 130 year old main house which was converted into 3 large high specification apartments.

During this first stage of redevelopment the old snooker room was demolished for a car park and the era of Don, Dominoes & darts brought to an end. These first 3 apartments were completed and opened on the 1st December 2015.

In 2016, the second stage commenced and a further 4 modern apartments were converted from the remains of a 2 storey section of the old conference hall and facility buildings.

These 4 apartments were opened on September 12th 2016 and indeed since this date all 7 apartments have traded successfully in providing high quality serviced accommodation to the modern professional travelling workforce and hoards of visitors that travel to Barrow from the early Spring until the end of September each year.

Perfect for leisure tourists preferring self catering short breaks in Barrow-in-Furness. Or a home from home for travelling professionals. 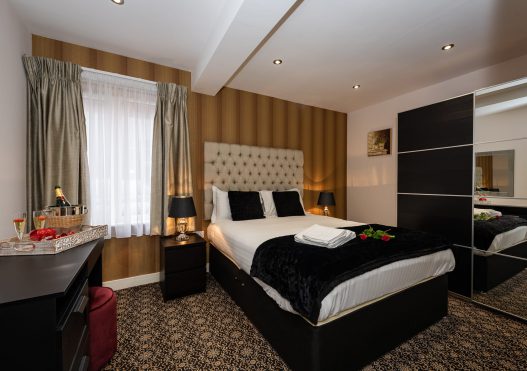